The State of the Arts in COVID Times

This event is online only, you'll receive a link by email. 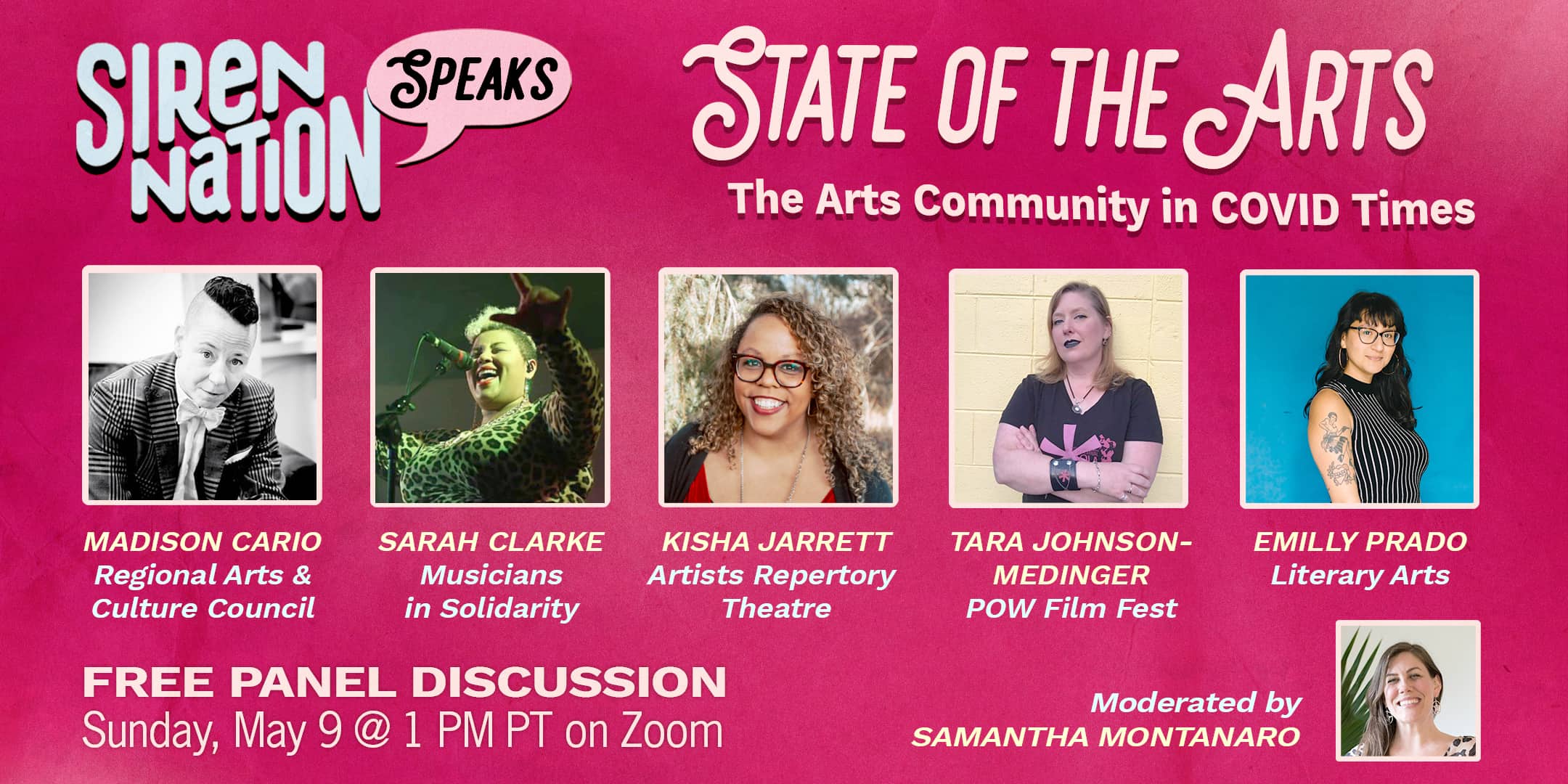 Join us for a lively panel discussion exploring how the arts have struggled, survived, and sometimes thrived during the COVID-19 pandemic. This all-star panel features Portland, Oregon–based artists and arts administrators from different disciplines and backgrounds, coming together to discuss their experiences of how the arts have been affected by a year in pandemic lockdowns, how arts communities are adapting, and where we may go from here.

Be sure to bring your questions for the Q&A!

Closed captioning will be provided on Zoom for accessibility.

Emilly Prado (she/her)  is a writer, community organizer, and the Director of Youth Programs at Literary Arts in Portland, Oregon. Emilly’s work as a writer focuses on creative nonfiction and journalism, with an emphasis on amplifying the voices and experiences of people from marginalized communities. She is an award-winning multimedia journalist with publication in outlets including NPR, The Oregonian, Eater, The Stranger, and more.

When not writing or teaching, Emilly moonlights as DJ Mami Miami with Noche Libre, the Latinx DJ collective she co-founded in 2017. Her debut essay collection, Funeral for Flaca, is available for pre-order now and out with Future Tense Books on July 1, 2021..

Madison Cario (they/them) became RACC’s Executive Director in January 2019, bringing more than 20 years of experience serving a broad variety of constituents from nonprofits, community-based organizations, city and county government offices to creatives, small businesses, and the education sector. A constellation mapper, they believe in creating authentic networks that are built to hold space for diversity.

Prior to joining RACC, Madison was the inaugural Director of the Office of the Arts at the Georgia Institute of Technology, where they were lauded for their strategic and entrepreneurial approach to innovation, collaboration, and creation in arts and culture. Madison has held a variety of senior-level positions in the nonprofit sector, including the East Bay Conservation Corps in Oakland, Painted Bride Arts Center in Philadelphia, and Annenberg Center for the Performing Arts. They have served as an advisor to the National Dance Project, the MAP Fund, the NEA, and other funding and advocacy organizations.

Their lived experience as trans and neurodiverse has informed their focus on equity, and their experience as a leader, technician, presenter, producer, funder, and advocate makes it possible to shift across genres and geographies while keeping local, regional, and national horizons in view. Madison is an artist, administrator, ambassador, and advocate for the arts.

Sarah Clarke (she/her) is a Black activist, musician, equity advocate, and mother, born, raised, and currently residing in Portland, OR. Perhaps best known as the vocalist of Dirty Revival, she can be found on stages with a variety of acts in the Pacific Northwest. With an industry halt on touring and performing, Sarah has been able to focus on her passion for advocacy work, and in June of 2020 she founded Musicians in Solidarity, working with like-minded individuals to build more equitable and inclusive avenues and programming in the world of music.

She is one of several Portland musicians working to develop the community-run record group People Music, a label dedicated to supporting artists through both the creative and business sides of the music-making process, all while operating with the core belief that artists should retain ownership of their creations. Sarah is also the co-director of MusicPortland’s Black Equity program, LEAP, focused on building equitable infrastructure within Portland’s musical ecosystem.

Kisha Jarrett (she/her) is the Managing Director at Artists Repertory Theatre (ART) in Portland, Oregon. She is a creative change-maker with a background in marketing and development throughout her ten-year career in arts management that has helped raise over $50 million for various organizations and has a cumulative earned revenue of over $5 million. A Virginia native, she has lived all over the country and now calls Portland, Oregon home.

Kisha is also a writer, director, producer, actor, musician, and storyteller. She has performed for both stage and screen, been a musician at SXSW, and has been a costume designer for the stage and television, and an independent bakery owner. Through storytelling, she has performed for the Moth (2017 and 2018 GrandSLAM winner), Seven Deadly Sins, Wildfang, and Back Fence PDX where she is a co-host and story producer. Most recently, Kisha was seen onstage at Portland Center Stage @ The Armory as the Headmistress in School Girls; or The African Mean Girls Play, a co-production with ART. She is working on her second feature-length screenplay, pre-production for a feature-length documentary (Black Girl in the Woods) and an educational piece for the Oregon Bar Association (about four black suffragettes in Oregon who deserve to have their stories told), post-production on the first devised DNA:Oxygen short film (See Me), and writing her first novel.

Kisha is proud to be a co-founder of the DNA: Oxygen program at ART. She is in the inaugural cohort of the LORT EDI Mentor/Mentee program and serves on the LORT EDI committee. Kisha is on the Literary Arts Festival of the Book Committee and has served as an Event Producer for Oregon Media Production Association (OMPA), Children’s Book Bank, Boys and Girls Club, Artists Rep, Live Arts, MTV Woodie Awards, Invisible Children, World Monuments Fund, and School of Visual Arts. She serves on the board of directors of Global Works Community Fund.

Tara Johnson-Medinger (she/her)is a film director, producer and champion of gender equality in the entertainment industry. Co-producer of the award-winning music documentary The Winding Stream and feature film City Baby, her feature film directorial debut My Summer as a Goth was released in 2020. An advocate for women in film, Tara honors groundbreaking female and nonbinary filmmakers as Executive Director of the international Power of Women in Film Festival (POW Film Fest), while developing the next generation of media makers through the youth education forum she founded, POWGirls.

Tara served on the founding board of directors of Women in Film Portland and was awarded the 2013 Service & Inspiration Award by the Oregon Media Production Association. Before moving to Portland, she was a manager of affiliate promotion at the FOX Broadcasting Company in Los Angeles. Through her production work as well as POW Film Fest, Tara wants to promote and create new opportunities for women filmmakers.

Samantha Montanaro (she/her) is an entrepreneur, activist, musician, mother, and thought leader in the global cannabis industry, guiding and bringing the community together in this revolutionary emerging space. Samantha is the co-founder and CEO of Tokeativity, a women’s empowerment and event network featuring a robust tech platform that brings communities around the world together on feminism, normalization of plant medicine, and the self-healing revolution.

Samantha is also a soulful songwriter who fronts her Portland-based psychedelic folk pop band, Mama Sam and the Jam. Her passion for plant medicine, music, art, urban farming, the psychedelic renaissance, and progressive community culture are woven into everything she does. Samantha and her work have been featured in numerous media outlets including Forbes, Rolling Stone, Cosmopolitan, Newsweek, and Conde Nast, and she is known for her progressive stance on drug law reform, education, and urban development.

This event is online only
You'll receive a link by email.